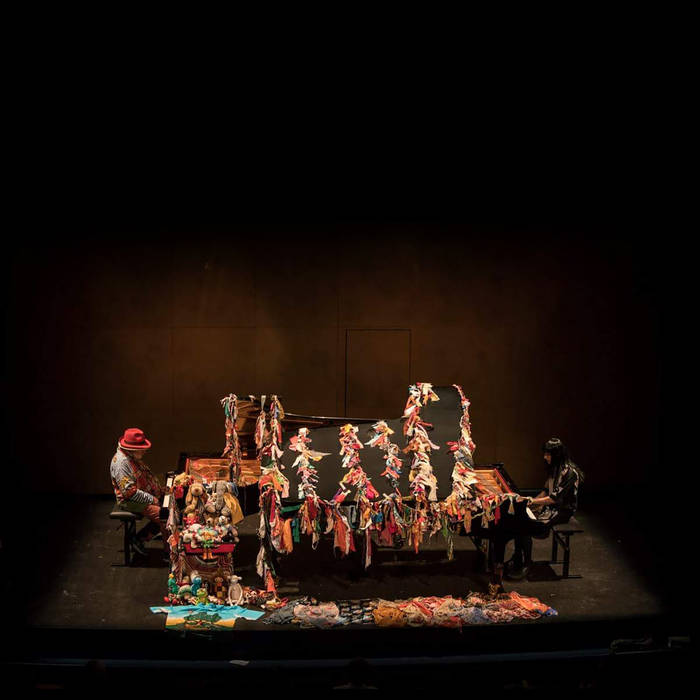 Charlemagne Palestine’s majestic 1976 work The Golden Mean, originally performed by Palestine on two pianos, is revisited here as The Goldennn Meeenn + Sheeenn, a new collaboration between Palestine and the enigmatic musician Rrose.

Palestine and Rrose first joined forces a decade ago, when Rrose was studying at Mills College. Rrose was inspired to play Palestine’s masterwork Strumming Music in the grand wooden halls of the Mills Student Union, designed by the noted architect Julia Morgan. Rrose wrote to Palestine, inquiring about a score. Palestine answered that there was no official score, instead exuberantly inviting Rrose to study with him in Belgium, at his home.

Fast-forward to 2018: the Festival Variations in Nantes commissions Palestine to perform The Golden Mean, reworking the piece for two pianists. Palestine chose Rrose to join him in this new rendition of the work. Together, they performed The Golden Mean (reborn as “The Goldennn Meeenn + Sheeenn”) onstage at the main opera house in Nantes -- the sumptuous Théâtre Graslin – with extraordinary results.

The concept of the ‘golden mean’ goes back to the roots of mathematics, and ancient Greek philosophy. It is an important work in the Palestine mythos, embodying his total immersion in the power of the interval. “It’s probably his most systematic work . . . a step-by-step journey through the intervals of the octave,” says Rrose. “When we rehearsed it, we were noticing how each interval is like a universe of its own -- with its own history, emotions, and sonic qualities all mixed up together. Every time you move from one interval to the next, it feels like moving into another world.”

“I love the interval,” Palestine told me in a recent interview. “I love when it plays with itself. That's what I learned from organ musics too. You can just do an interval, and if they're just slightly out of tune with each other, then they shimmer . . . they play themselves. And it sounds like somebody's playing lots of notes. In your ear, it's like an aural phenomenon . . . that's my whole concept. I make something that then does itself somehow. It continues by itself. So I don't have to always be there. And that makes my music a little less egocentric. So there’s more space. Also for the listener — the ear plays with these things, and you're not always being given orders. Your ear isn't given orders all the time of what to listen for.”

Rrose adds this note to listeners: “Do not focus your attention on the notes being played, but on the ocean of overtones swimming, suspended, overhead, brushing against one another, kissing one another, melting into one another.”

Special thanks to Cyril Jollard, Le Lieu Unique, and all in attendance!!!